Apparently, some people believe that writing a book is easy. You sit down, put word after word after word and if you keep at it for long enough you will eventually have a book. Sweet but untrue. Painfully untrue.

Writing a book has been compared to many things — except perhaps a summer’s day, I wonder why — but I’ll settle for likening it to a dissection of a complex organism some parts of which you can recognise but others are completely unfamiliar. And then you have to write a report on it.

Yeah, it’s that easy to write a book. And no one gets it right on the first try, so you get to edit and revise, and edit again until you do get it right. Wonder why there are so many people on Twitter who say they are writers but they’ve never finished a single book? Now you know why.

Easy is the one thing writing a book isn’t. Luckily, there are also a lot of things it is, such as wonderful fun, horrible torture, a journey into self-discovery, a transcendence into misanthropy, and an all in all remarkable experience. Which tells you why so many other people start writing a second book the moment they finish the first one.

The journey of a book starts in the author’s head but it is supposed to end on a bookshelf. Or preferably on many bookshelves and in many e-readers. Which is why we try to get our books published. Which is why we are forced to learn to write synopses. Which seem to be more or less universally considered a lot more unpleasant than writing the books themselves. I don’t think I’ve ever heard a writer praise synopsis writing unless they were getting paid for it. Yes, writing folk offer synopsis writing services like they offer editing services. That’s how unpleasant it is.

Imagine writing a 100,000-word story. You have lived and loved and hated this story for weeks and weeks. You have revised it. You have killed your darlings. You have come up with an ending that’s a lot less horrible than all the other ones. You have poured your soul into these 100,000 words. You have done two spell checks and proofed the manuscript three times. And now you have to compress this story into a page or two maximum, make it 500 to 800 words. Good luck. Painful is one word for it. Hell is another.

Objectively, writing a synopsis shouldn’t be too hard. We’ve all been taught that in school: synthesising the main points of a narrative. Only we’ve been taught how to do it to other people’s narratives. It’s very different when it’s your narrative. In it, everything is important, to the last word. How are we supposed to detach ourselves enough to synthesise some imaginary main points and omit others? As you can see, there is more than one reason synopsis-writing services exist.

They call it the cover letter in North America. They call it the covering letter in the UK. Yeah, I know, amazing difference. Together with the synopsis and in some cases the manuscript or part of it, the thing is known as the query. Whatever you call it, this is the next circle of writers’ hell. Especially the elevator pitch.

The elevator pitch, as a million Google results will tell you, is the equivalent of the first impression when you walk into a room full of strangers. Then these results will start explaining how to craft the perfect pitch. They will invariably feature the word ‘hook’, which says a lot about the process of offering your book to agents and publishers. Yep. You’re fishing and all you’ve got is that hook. Nice, right?

The cover/ing letter is a further compression of your story, with a cliffhanger. If the elevator pitch — the second sentence of the letter after you state your intentions — is the hook, the rest of the letter is the bait and I can’t believe I’m sticking to the angling metaphor when I’ve never held a fishing rod in my life. I’ve never even seen one in real life. But it’s an enduring metaphor because, apparently, it’s too true.

Pitching a book to an agent or publisher makes you a salesperson on top of a writer. Okay, that’s not the image I had in mind but you know what I mean. You don’t have to be a self-published author to have to be a marketer. If you ever want to see your book published you need to acquire and develop some marketing skills and apply them to your cover/ing letter. Yeah, writing has additional benefits like that. Who knew? And yes, there are also covering letter writing services because nobody is forcing you to become a salesperson, of course.

The further you go into your writing-to-publishing journey — and I hate the word journey as much as you do so let’s call it a quest — the worse the horrors become. There’s no point in sugar-coating it. For all those uncertain whether they have a book in them and whether it’s worth trying to get it out, you better go into this prepared.

Sending out manuscripts and/or synopses complete with a covering letter is the first step in a dance of frantic inbox refreshing, hair pulling, and freaking out when you discover you have a typo in the title of your own book. Yes, I’m speaking from experience. I sent a query to an agent, in which I misspelt the title of The Lamiastriga. Not that anyone would notice, I suppose, with a made-up word like that.

Nervous anticipation is far from the best of emotions and you haven’t felt real nervous anticipation until you’ve sent your first batch of queries. Did I say batch? Of course I said batch. You can’t send one query, wait for a response and then send another. The reason is that agents and publishers take several months to respond. If you only send queries one after the other, you will almost certainly grow too old to care before you get an acceptance. Or die.

A lot of advice on querying mentions the advantages of growing a thick skin early on in the jour–, I mean quest. A thick skin is a must if you want to stay in the writing game because 99% of the responses to your query, crafted with blood and sweat, and tears, will be rejections. Still, even with a thick skin, there’s no nervous anticipation as the nervous anticipation after sending out a batch of queries.

The writers’ jury seems to be still out on the question of whether it is better to have no reviews or bad reviews but the majority is leaning towards bad reviews. A bad review, after all, means someone bought your book (Okay, or got free copy) and read it. No review means… no review.

The only time I thought “What the hell were you thinking writing a book and believing anyone would like it? What is wrong with you?” was after The Lamiastriga was out of the gate. Not when it landed at the publishers. Not when we picked the cover. After it was out. Because the only judgment that ultimately matters for a writer is the judgment of the readers. Which is oddly hilarious: we write for readers and we are scared to death of what these readers will think about our books. Yes, writing is a form of masochism.

There are aggravating circumstances as well. There is an ongoing debate among readers whether it is better to leave a negative review for a book or not leave a review at all. I don’t know when we all became so sensitive to criticism or rather I do know but I’m not talking about it because it makes me angry.

What I will talk about are reviews. I want them. We all want them. Reviews are reader feedback and we live for this feedback, except those of us who don’t care about it because they believe their book is brilliant/junk and no person’s opinion can change that. No wonder there are dozens of reader feedback memes circulating across social media. Like this one: 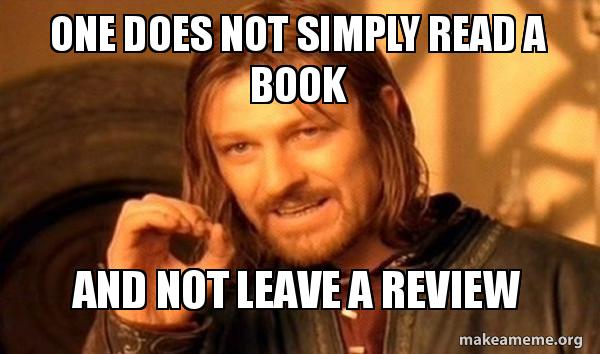 All in all, if you read a book by an author other than the superfamous ones who can live without your feedback and if you like it even a tiny little bit it’s cruel and unusual punishment for the author to not leave a review. That’s the world we live in.

There’s a silver lining to all this, though. It’s only immensely horrible the first time. Then it gets a little better. If you keep at it long enough, all these circles of writers’ hell become circlets and you can then make a set of earrings and a pendant out of them. There will even be one left for a ring. To rule them all. Okay, I’ll stop now.