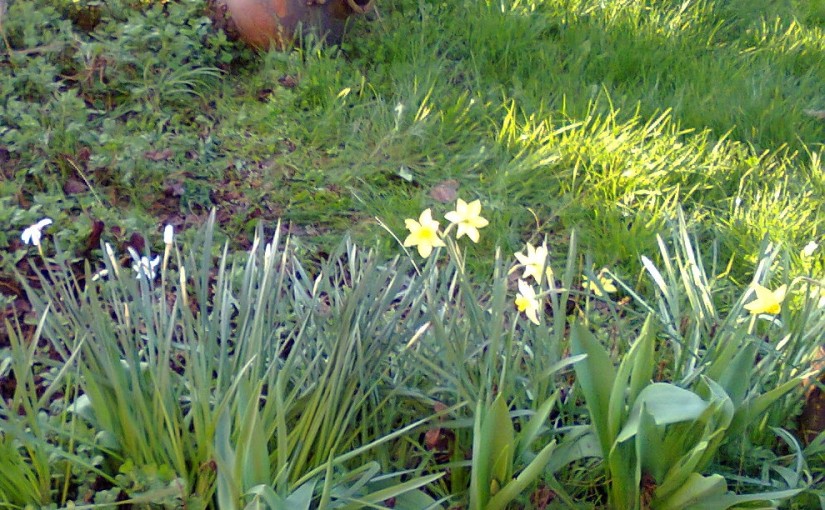 The first signs of spring are in the air in my part of the world and though it’s a bit early in February, I don’t mind it, too fed up with having to wear a dozen layers of clothing when I go out in the morning. It’s not that cold — we’ve got nothing on Canada, northern Russia or the States — but it is unpleasantly cold and it’s been cold for long enough. Enter spring! And close the door behind you because draught kills.

Dear Extremist, How Do I Love Thee

I don’t often get angry with petty extremism of any sort but last week the latest from Extinction Rebellion got my blood boiling. if you’re an Extinction Rebellion supporter, now is the time to go. Thank you. So, they went and dug out the lawn of Trinity College in Cambridge because environment. Let me say that again. They went and dug out a lawn. At a Cambridge college. To protest the fossil fuel industry.

I feel compelled to paraphrase Pratchett’s Captain Vimes and say that no matter how hard I try to accept the idiocy that abounds among our species it keeps reaching new lows that keep surprising me. I probably have to quit and admit defeat. There are simply too many ways for idiots to be inventive to keep up with them.

If you think me calling ER idiots means I don’t care about the environment I will surprise no one by saying you’d be wrong. As I’ve said before, my carbon footprint is pretty reasonable and very likely lower than the footprint of those vegans* who subsist on crops flown in from halfway around the world and out-of-season greens.

The reason I call them idiots is that they are after the wrong target. Doors to buildings (to glue themselves to), airports (they planned a drone “attack” on Heathrow to ground planes), lawns, for frack’s sake. None of these things has any role in the environmental destruction they claim to be fighting.

It’s the people whose fault all this is. Why not go after the people? Given the degree of aggressiveness displayed, they shouldn’t have a problem offing a CEO or two. After all, the planet’s biggest problem is the growth of its human population because this growing population needs energy to survive. Go for the root of the problem, I say, leave lawns alone.

Spring is the best season for querying although there is something to be said about autumn, too. In the autumn you’re preparing for the cold dark of winter, so you’re less sensitive to rejection, theoretically. You already expect rejection because life is meaningless and we’re all going to die alone. But spring is the best because as nature wakes up for new life after the aforementioned cold dark, so do you. Optimism is so much easier in spring than in… well, every other season.

So, I’ve started preparing my query kits as per publishers’ specifications. I’ve got a first rejection rights clause in my contract with the publishers of The Lamiastriga, so they’re getting my next two books first but I like to be prepared and waste no time when — okay, if, since I’m being optimistic — that first rejection comes.

I think I mentioned this last week, but I’ll mention it again. It’s unbelievable how different querying is when you take it too seriously from when you don’t. Last time I was so serious I almost pulled a brain muscle while doing the synopsis and the cover letter. This time, I did it in an hour total, all of it.

The Second Skin synopsis is 803 words long and it covers all the main points. I would suffer if I have to cut this down to 500 but for now, the publishers I’ve shortlisted are pretty generous with the maximum length. The cover letter is 291 words and that’s including my bio, the greeting and the Best regards. And they both passed the test of reading them three days after writing them, closely, with a deep frown, on the lookout for typos and badly expressed ideas. Yay me.

If there’s ever a competition for best legal drug dealer, I’d give the prize to Iqos. Not only do they give you a device to try for 20 days for free, not only do they give you five free packs of cigarettes when you decide to buy it, they also give you a solid discount “Because you want to buy the device you were trying for free.” Yeah, I wondered what sort of a person will use one device for three weeks and then demand a new one to buy.

I got the device for my trip because I reasoned it would be bad manners to stink to people I don’t know. I kept it because I kind of got used to it. It tastes better than liquid nicotine e-cigarettes and it makes just enough steam to cheat my brain into thinking I am actually smoking. Bonus: no tars and the effect of that absence on the body shows pretty quickly. Now, when I exercise by running in place I have to stop because my legs start hurting not because I start panting. And I still smoke the bad ones, too, just fewer.

What I can’t understand is why would an Iqos battery have a Bluetooth button. I thought about it. I found no rational reason. You can’t charge your cigarette holder through your phone (I think). Even if you could why would you need to? If you need the holder charged, you need it to be close to you, not on another continent. If anyone knows why the charger has a Bluetooth button I’ll be eternally grateful for an explanation.

So, I guess I’ve gone digital in the smoking department, grudgingly but not too much. I used to think I’d be the last smoker to die smoking good, old, tar-rich coffin nails but thanks to nicotine peddlers such as Phillip Morris, I might end up fully digitised at some point in the future. If anyone’s thinking “Why not just kick the habit?” I love you. That’s really sweet (I mean it). I should have filmed my husband’s journey from smoker to vaper. It would have made a great horror film.