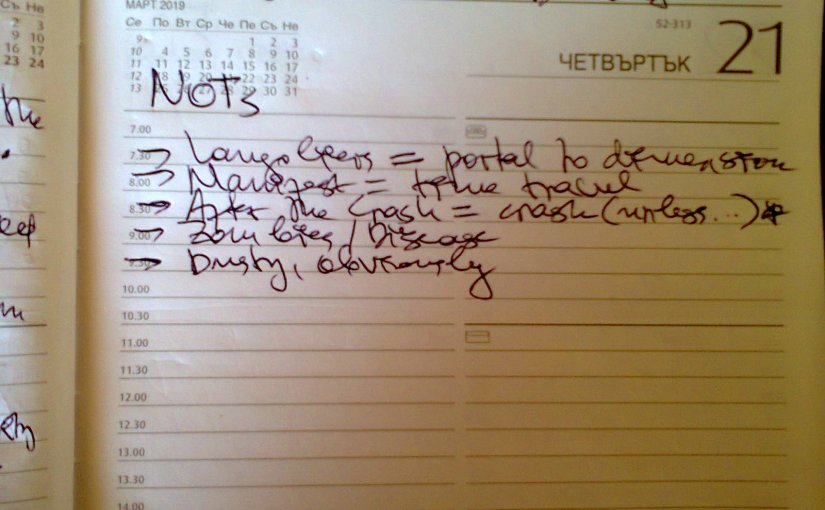 A couple of days after my realisation I was a plane spotter I made a decision. It was a decision prompted by strong emotions and the feelings I have harboured for planes for many years, and it was this: I simply have to write a book with a plane it it. A book about a plane. A book about a flight with a problem because I’m now two seasons into Air Crash Investigation and it looks like I’m going to binge my way through the whole thing before I return to all-time classics such as Passenger 57.

Now, some say that plot is overrated and it’s the story that matters. As far as I’m concerned, you can’t tell a story without a plot, unless you’re fine with being the only one who can understand what you’re writing about, so I needed to come up with a plot. But before that, I needed to come up with a writable idea. “A book about a plane” is definitely not such an idea.

As you can see from the above featured image, I had a slow start. Usually, I first get an idea, an excellent, brilliant, sparkling, genius idea that just has to be put on paper. Not this time. This time, all I had was “Gotta write book about plane.” This, however, did not discourage me and neither did the instant flood of already–been-done information my brain, who doesn’t like me much, supplied without being asked to.

To translate the NOTs list above (because I’m aware how legible my handwriting is):

After the Crash = crash, unless… (unless I manage to make it different, that is)

And then nothing. My mind was completely empty. I turned to the characters, because that’s what I do once the “What if…” hits me. Obviously, at least one of my main characters had to be a pilot because pilots are really fascinating and admirable and I wanted to do a lot of research into pilot training and pilot psychology so much, and also pilots are fascinating. That’s how my thinking went and I didn’t feel an ounce of embarrassment about what I confidently call research. Other people are annoyingly curious about people’s professions. Writers do research. It’s different.

But then I thought, why stop at just one? Let’s have both main characters — I’d decided there will be two of them — be pilots. A former couple, perhaps. Or siblings with bad blood between them. One captain, one first officer. They can’t stand each other but they have to work together and they both lie they’re fine with that.

This Will Change When Something Goes Wrong With The Plane. There it was, one more hurdle on the plotting track cleared. Of course something must go wrong with the plane, right? If you’re writing a book with a plane in it, something has to go wrong with it to justify this choice of setting. Which is where the next, and final, hurdle came into view. What the hell will happen to the plane?

Okay, I can hear you say “Well, you’re watching ACI, there must be some ideas there.” You’re right, there are a lot of ideas there. This would be great if I wrote thrillers or crime. But I write speculative fiction. I did have a passing thought about dabbling in thrillers but I first wanted to give the supernatural a chance. It was annoying because portals were out of the question but they were a nagging presence in my mind while I browsed ideas or rather tried to pull ideas out of thin air.

I started giggling because I’m a horrible person and the thought of imaginary people finding themselves on an invisible plane high in the sky amused me. This was going to be a horror comedy book. A spectacular one with a couple hundred people screaming their heads off and at least one dying of a heart attack, and with a couple of pilots who can no longer see their instruments. Hah! Land this, Captain.

A blogger gracious enough to offer me the opportunity of an author interview asked me, among other things, how I got started, what made me start writing. I said it was the need to try and put my thoughts — my confused, hormone-charged teen thoughts — in some sort of order. But if anyone ever asks me why I keep doing it I’d have to say it’s because of the feeling when the idea hatches and starts growing. They grow so fast you wouldn’t believe it.