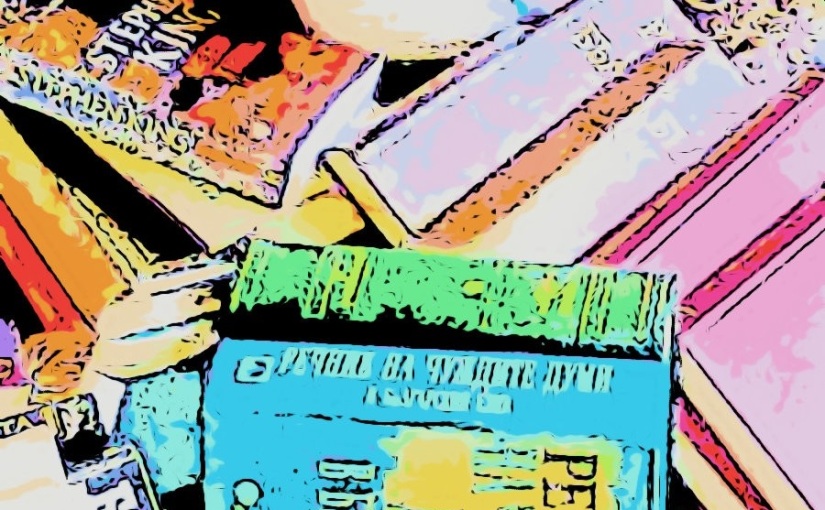 The other day I saw someone on Twitter complain that they’re not getting their stories published because they don’t fit in with publishers’ ideas on how writing should be done. For a second, I empathised. We’ve all been there, right? We’ve all had stories we think are exactly what a magazine or an anthology publisher is looking for in their call for submissions and… they reject it. A second later, however, I read on and the person complaining admitted part of their unusualness was that they wrote but didn’t read much. That’s where I stopped empathising.

I don’t know where this idea that you can be a writer without reading any — or many — books comes from. Okay, I do have some thoughts on the topic but they’re not very polite, so I’ll spare them. Of course, you can write without reading. Anyone who’s mastered the skill of using their fingers to tap keys on a keyboard or draw the symbols we call letters with a pen or pencil on a sheet of paper can very literally be a writer without being a reader. But something tells me that when we say “writer” we mean “someone whose works are read and liked by other people.” And this, I’m afraid, you can almost never do without a lot of reading.

My first attempt at fiction was a story about gods. It was supposed to be a funny story but what it actually was, I admit, was an awkward Terry Pratchett imitation. I’d just started reading Pratchett a few years before that and by that time I was infatuated with the Discworld. Earlier than that I tried to imitate Gerald Durrell and his Corfu trilogy. I still have that notebook somewhere. A lot more recently, when I read King’s “On Writing”* and his argument that all writers start by copying their own favourite writers I said to myself “Oh, so that was all right, then. We all start as copycats. Phew, good to know I wasn’t a plagiarist.”

This is why reading a lot is important: sooner or later you’ll find an author whose work you really admire. You will admire this work so much you will unconsciously try to imitate this author. Without a broader perspective, meaning reading the works of lots of other authors, you’ll walk in place, writing imitation after imitation. Which would be sad for everyone as you’d just be wasting your talent.

Reading good literature is, of course, essential. I speak from painful experience when I say that literary theory is good to be familiar with but you’d never ever grasp what makes good literature if you read about it but don’t read it. You’re free to dislike what we collectively call “the classics” for whatever reasons but in case you do, please stop and think for a second why they are called classics. I know you know the answer and I also know there are bound to be at least a couple of works among these classics every single one of us would like, perhaps even love. Like I said, there is a reason they are called classics.

Me? Oh, I’ve read David Copperfield at least three times and I got my husband (then boyfriend) an A at his oral exam in Russian literature by telling him the plot and main outtakes of Anna Karenina. I consider Shakespeare one of the most blatant plagiarists of all time (try reading The Merchant of Venice after you read The Jew of Malta by Christopher Marlow) but he’s a brilliant wordsmith (a word he probably coined, too) and that’s that.

I was going to write my Master’s thesis on D. H. Lawrence because I loved his books so much but then I realised I have nothing new to say about them and I’d rather just keep on reading Lawrence than write about him. I do admit reading classics was part of my education and there are a lot of fine books I would never have read had I gone into another discipline, which is why I’ve never regretted it.

However, I also had to read some fine works that I simply could not stomach even if they are classics, seminal works, creme de la creme and so on. I gladly admit I would not read anything by James Joyce unless I’m paid handsomely but I have friends who not just read (voluntarily) but also enjoyed Ulysses. I have also never felt the urge to read Moby Dick. We all have different tastes and that’s fine.

So what if you’ve tried and you haven’t found a classic that resonates with you? Well, there is such a thing as genre classics, right? If literary classics leave you cold, there’s plenty to choose from in all sorts of genres and sub-genres. Of course I mean The Lord of the Rings, but that’s just one example out of  hundreds. Remember, we’re not talking about the best of the best only, we’re talking about good books.

There are hundreds of good fantasy/horror/thriller/suspense/romance books out there, books that will teach you about plot structure, pacing, and the proper use of language. They, if I may take this chance to quote King again, will make you envious and insignificant. That’s how I feel every time I read Umberto Eco but has that stopped me from writing? Hell no. I’ll never ever be as good as Eco or Atwood, or Pratchett, or King, or Gaiman or any other writer I admire. But I can try to be as good as my capabilities allow me and these writers’ works, which I rather devour than read, are the greatest help I can imagine.

But I strongly believe we also need to read bad books, and by “we” I mean the reading folk, not just reading/writing folk. The reason we need bad books is to be able to appreciate the good ones better. You know, without darkness we wouldn’t know what light is, and without evil we wouldn’t know good if it hits us in the face, which good would never do but I digress.

I’ve read the 50 Shades trilogy. I’ve read two of the worst books ever written in Bulgarian ever and at least four of the worst written in English ever, I’m certain of it. I’ve read a few Harlequin paperbacks, and I’m the irreverent owner of three Jackie Collins works, which I have read more than once with pleasure. The thing is, I know they are bad writing and the reason I know is because I’ve read the good stuff, too.

When you’ve read a few dozen excellent books it’s that much easier to spot the bad one and figure out the mistakes you don’t want to make in your own writing. Of course, you’ll still make them because absolutely everybody makes mistakes, even the brilliant writers, but you’ll be able to spot them later on. Which is why most good writers are avid readers as well.

So, there it is. To write most of us need to read. A lot. I’m sure there are exceptions who are just born with a flair for language and who can put their thoughts down in a structured way without needing to learn how to do it from others who have done it. But we’re in genius territory here and the number of geniuses in any population is minute.

Honestly? I think most of the people who actually believe they can be good at writing without reading are simply too lazy to read. There, I said it. But if you can’t be bothered to learn how to do something, better don’t bother doing it at all. And if you do it, try to do it right. It’s about self-respect, really. With this I leave you to your reading and writing. I’ve got two first drafts to finish and Mildred Pierce to read.

*It’s the best book on writing I’ve read so I’ll be quoting from it frequently. Sorry. Not sorry. It’s really very good.