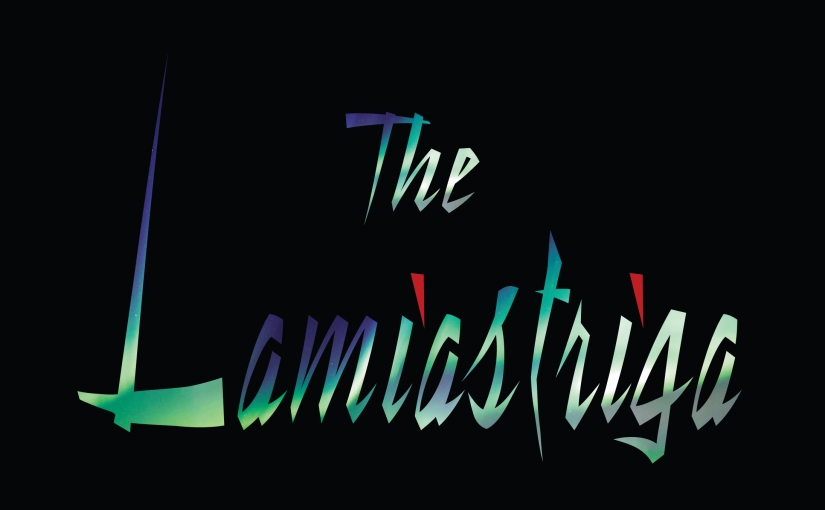 One day, about ten years ago, someone called me a lamiastriga. He was a news writer at the company I was working for at the time and I was an editor. He was an excellent writer and he was also a really funny and smart guy. We chatted about all sorts of supernatural stuff (we were both fans) and it was during one of these chats that he invented the word. Later he left the job and moved to Germany. We lost contact but the word stuck in my memory.

A few months after he mentioned it for the first time, in a “True Blood” thread on the biggest and baddest parenting forum in Bulgaria, bg-mamma.com, I posted a little story called “A Day in the Life of a Lamiastriga”. Anastacia was a vampire caterer and she was having a very bad day but in a funny way. The TB gang–the best online gang in the world–found it funny, so a few other “Days in the Life of” followed before I dropped the story because I got bored with it. But I didn’t forget it.

A couple of years later I thought I’d give Anastacia another try. I really wanted to know how a lamiastriga who supplies blood to vampires and makes a lot of money doing this lives, what sort of person she is and what could happen to her to disrupt the easy life I imagined she had. I gave her a love interest (a vampire) and an annoying archenemy, a seraphim. I did some writing and then dropped it because, well, discipline has been a problem all my life.

Then I got pregnant, found myself a mother, and for some reason this really got my writing engine going. I gave the lamiastriga another go. I wrote in the first person from Anastacia’s perspective and I tried to keep it funny but the story refused to yield, so I dropped it again. I was way too distracted by other ideas that turned into short stories.

In 2015 (I checked my “Lamiastriga” folder, I can’t remember that far back in time) as I toyed with my notes on the story, it hit me: I should make it a two-voice story. By that time the original–and boring–love triangle had fallen apart and the seraphim had turned into a dragon because I like dragons and because they are hotter than seraphims. At least I imagine so and that’s totally fine because nobody seems to know a lot about seraphims.

“Lamiastriga and Dragon” was born, with alternating POVs, with a mystery, a villain, and some rather steamy sex. I got down to business and the story began taking the shape of a book. And then I hit a wall. I couldn’t come up with a plausible ending. The evil plan wasn lame. The villain didn’t work. The climax was not climactic at all. So–you guessed it–I dropped the thing again.

A year later, after a half-hearted try at self-publishing (short story collection, still out there on Amazon) I started submitting stories. My first acceptance letter came ridiculously soon, which made all the rejections that followed harsher than they might have been otherwise but more importantly I picked up “Lamiastriga and Dragon” again because I’d found Wattpad and wanted to give it a try.

For starters, I changed Anna’s name. The 50 Shades series had ruined Anastacia for me. Then I dropped the alternating POVs. They didn’t work as well as I’d thought. And then I started writing every single day on Wattpad. A new story began to emerge in this third draft, a more wholesome story, funnier and more dramatic because, I realized a lot later, in the first two drafts I’d come to know the characters.

I removed the story from Wattpad a little before I reached the end because as the story took shape I started having grand plans for it. I also discovered the snowflake technique of planning a novel. I now liked the story so much I thought it might be a good idea to try and get it published the old-fashioned way. I thought I might try to find an agent to do this for me. Quite a long shot or someone who doesn’t even live in the biggest English-speaking book markets but a shot I wanted to take.

The third draft of “The Lamiastriga” was the first one I completed. I let it sit for a couple of months. How different the book turned out from the original vague idea was amazing, pretty much like the difference between a six-month fetus and the teenager it would grow to be. I’d go as far as to say an adult but adults are what books turn into after the editors are done with them.

Two months later I promptly printed the draft and started reading it. Of course I was horrified at the gaping holes in the plot, by the typos the spell checker had missed (all those real words that are just not the words that should be where you find them in the text, some of them hilariously changing the meaning), and by the sparse descriptions. I tried fixing the most obvious problems on the printed copy but I gave up soon enough. I’d just start out again instead of getting carpal tunnel from handwriting.

I know beta reading is hugely important and I considered asking strangers in Facebook groups to beta read “The Lamiastriga” but eventually I decided to go with friends for a simple reason: I know my friends. I can have some reasonable expectations about their feedback and no, I don’t mean I expected and hoped for enthusiastic praise.

I expected constructive criticism because that’s what beta-reading is all about. Did I get it? I got some and I also got some free proofreading from one friend. She insisted. I’m happy to say she only found about a dozen typos. Another one who I know is a fan of fantasy and romance, and everything that “The Lamiastriga” is about, turned out to suck big time as beta reader. Her only problem with the story, apparently, was that it was only one book and not a series. Enough said. Great friend, useless beta reader. And I told her so.

As I let the story sit for a while longer I wrote my cover letter. I’d already tried this last year and I’d gladly say I’d take a wasp sting over writing a cover letter. But over the last year I’ve written a couple of dozen cover letters for short stories, so I got decent at this. The final cover letters will, of course, be personalized but I think I got the elevator pitch right. It’s also sitting right now, while I’m busy with the only thing more dreadful than the cover letter: the synopsis. I’d take two wasp stings over this.

I used to pride myself on my ability to write succinctly. It’s a talent that’s been honed into a skill by my job. When I started writing the synopsis of “The Lamiastriga” my pride quietly sneaked out of the room. I set out to write 500 words and I produced 1,000+, a third of which dedicated to the ending (I’m really happy with my ending, sue me). I deleted these 1,000 words and started again, after I read a few examples of good synopses and heaps of synopsis-writing advice. I’ve now got the 500 words that will need a few editing sessions, which is something I’m not exactly looking forward to, but needs must and I’m prepared to do the work. Add a non-fatal snake bite to those wasp stings because I really, really hate editing.

I’ve assembled a list of about 20 literary agents I will start pitching to when everything is done and I’m certain there is nothing more I could do to make “The Lamiastriga” better. I’m thinking of expanding this list to 30. I’ll also pitch to small publishing houses though I haven’t decided on the number.

Now that my skin has thickened from all those short story rejections, I think I can handle 30 rejections. Probably no more but 30 or 40 I could handle, especially since I know my chances are slimmer than those of a comparable author who happens to live in, say, Iowa, closer to all the networking opportunities, able to physically promote their work. Sometimes geography sucks but there’s nothing to be done. All I could do is make the book as good as it can be and praise the digital era, despite my mostly mixed feelings about it.

I sense a question coming and this question is why I didn’t try the Bulgarian book market. The long answer is: because I’m out of sync with the Bulgarian market and with Bulgarian publishers. We read a lot of  fantasy but almost 100% of it is foreign fantasy. I have heard about publishing houses that do fantasy and horror but… Oh, well, I’ll just come out and say it: the local publishing industry has yet to catch up with its counterparts in the West in way too many ways for me to care for it. Which leads me to the short answer and I no longer care how it sounds: I want millions of people to read Anna’s story. There, I said it.

I thought this would be it. I wrote a story, made it better, made it even better, set the stage for pitching it to innocent people who might or might not like it, and I thought I could take a break. Yeah, right. I knew I could probably write another two books about these characters but not immediately. I needed a break. And then I had an idea that was just too good to let sit and mature.

I’m now 10,000 words into “Eleven Doors”. It’s got lamiastriga Anna and dragon Simon in it, and it’s got demons and a couple of immortals who didn’t ask to be immortal but don’t want to die, either. I really struck fertile ground with the lamiastriga story. Now it’s just a question of digging and getting blisters, and planting a plot, and fertilizing it with actions and emotions, and plot twists, and evil plans, and maybe some jokes, and weeding, and watering until the blisters turn into calluses, and then cleaning and polishing the fruit of all these efforts. Nothing to it, really. After all, it’s not really a question of whether I want to do it or not. I can’t not do it. Besides, Terry Pratchett was right as is was about pretty much everything. Writing is the most fun one can have by themselves.